Start a Wiki
This page, Torched Heaven, is the sole property of Tuffty and may not be referenced, used or edited without his explicit permission. If you are interested in the contents of this article simply make a request on his page.

Torched Heaven ( Tōchiedo Hiaben) is a Dark Guild located in the city of Trivia within the borders of the vast neutral nation of Libero. Their guild master Yuma L. Phoenix is also the Ruler of Trivia.

Torched Heaven was founded by Yuma after. Yuma left the guild on a tenure to procure information on various legal guilds, during which time the guild was under the leadership of Bartholomew Tiger.

Torched Heaven is a very powerful dark guild as their guild master is a member of the Ten Shogun, an influential underworld broker and the ruler of Trivia, a massive kingdom with immense military might. By extension the guild has control of an entire kingdom's military force alongside the members of the guild. The Guild Master was strong enough to defeat Fairy Tail's guild master Makarov Dreyar (who is also a wizard saint) without too much difficulty, though the latter was advanced in age. It's Ace, Kiyone is powerful enough to easily defeat high-ranking Ruen Knights and S-Class Mages like Kenji Inazuma. The guilds strongest team, the Nine Circles of Hell are all at least S-Class level in strength with several more members such as Bartholomew Tiger, Farnese Adelia and Toshiro Mazoku all being comparable in strength. According to the now deceased Mackie, Bartholomew's Tiger Squad was supposedly capable of combating the entirety of Kagegakure's military by themselves (though this is likely an exaggeration). Even regular dark mages such as Primith, Nobu and Nazareth are powerful in their own right with the latter being capable of using powerful Illusion Magic that could fool many people.

Beyond actual strength the guild has many spies and informants across the world in various positions such as the Magic Council, Fairy Tail and even several spies in the Ancyran Empire (though said spies were ultimately discovered and killed).

With the deaths of many core members and the betrayal of Tsubaki the guilds power has been diminished however they remain one of the most powerful and influential dark guilds around. 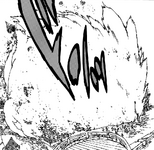 Retrieved from "https://fairytailfanon.fandom.com/wiki/Torched_Heaven?oldid=590471"
Community content is available under CC-BY-SA unless otherwise noted.