Trent Jaiden(とれんと じえいでん Torento Jeiden) is an Independent Mage who specializes in hunting down Dark Mages and Dark Guilds when given the chance, and often takes on dangerous tasks in order to get close to his targets. He has also been reconized as a very talented bounty hunter, who does anything it takes to make sure that he captures his target and brings them in alive if he can help it. He is the son of Tsunade Mai , Head-Mistress of Ito Academy, and has an older sister named Keiko Mai. He is currently married to Sakura Jaiden and is expecting his first child soon. After his son Deker Jaiden was born, Trent dedicated his time and energy to making sure his sun was raised better than the way he was.

Trent is considered to look more like his Father than his mother due to the wild style of his hair cut as the spikes and side burns make him look almost animalistic. He is seen to have dark eyes, smiliar to his mother and sister, and can often be seen wearing collared trench coats and fingerless gloves with combat boots. Due to genetics, he has been seen having white streaks of hair on his head, along with a very strong sense of smell. Underneath his clothing are deep rooted scars that he got from fighting against other people.

As a young boy, Trent was always trying to find different ways to get his mother to pay attention to him, whether it would be practicing with a practice sword or actively butting into her training sessions with her older sister Keiko. However, he was told that by his own mother that she didn't have time to waste on someone who would be given a free ride in life. The years of treatment and tension finally broke free when Trent lose the only person who cared about him, his father, when he went on a job to grab some jewels to buy him a birthday present. From that moment on, Trent stopped taking any interest in his mother and sister, and eventually ran away when he was sixteen years old, ironically the same age as his mother. During his travels, he became a hardened person who's only focus was on the job and survival. That was until he fell in love with, and married, Sakura Jaiden who gave him the feelings he never felt from his mother. This changed Trent back into the boy he used to be, and into a protective Father and husband when he was told that his wife was pregnant.

The Hunt: Evil of The Shadow Broker

The Nature of The Hunt

Trent Jaiden was the second child born to Tsunade Mai and sibling to her first child, Keiko Mai, but was immediatly disregarded by his mother due to her view on how the world worked. Aside from feedings, the only love he had received was from his father, who had to balance doing jobs to provide money for his family, and give his son the attention he needed. As the years went by, Trent kept question why his own mother never acknowledged him, and always focused her attention on his big sister.

For his sixth birthday, Keiko finally decided to try and mend her broken relationship with her brother by giving him a scarf that she made when their mother wasn't looking. However, that happy moment came crashing down when they got the new that their father was killed, doing a job to get money to throw his son the party he never had. Keiko became angered, blaming Trent for what happened, and ripped the scarf with her blade. The siblings never spoke to each other after that moment.

Tsunade realized the mistake she made by convincing herself that Trent would be given a free ride in life, and took it apon herself to train him in Arc of Mimicry magic, just like she and his sister had. The years passed as their relationship was somewhat normal, even though Trent couldn't wrap his head around the reasons why his mother finally decided to take an interest in his life.

At age 16, he finally found the courage to confront his mother on why she decided that he was now someone she needed to take care of. All she told him was that it was her fault that their father died, she was suppose to be the mother who took care of her babies, but ended up treating him like garbage. After hearing her words, Trent vented his anger out on her, and took his leave from the household to try and find someplace he can feel like he belonged.

On his travel, Trent became a professional bounty hunter, finding and taking down anyone who is on the run from the law in every town that he passed through. He learned how to better use his magic, and even took up another magic known as Magma-Make. One day after resting at a town, he was suprised when his older sister came to the same town, apologized for the way she released her anger on him when their father died, and wanted him to come home where he belonged.

Trent refused her offer, and the two even fought against each other, but was stopped when Trent managed to sneak away after launching one of his attacks. They kept running into each other time and time again, the same result as the last, until Trent noticed that Keiko stopped meeting up with him.

On one of his jobs, he was hired by a Dark Guild, who needed another bounty hunter named Sakura Inoue, who was constantly barging into their buisness. Trent met up with the girl, however during their fight, Trent felt connected to the girl in a way they couldn't explain to one another. After falling from exaustion, the two talked about their pasts, realizing that they had more in common than they originally felt, and as the talking continued they began to fall in love with each other. After healing their wounds, the two decided to bring an end to the Dark Guild with both of their combined Magics.

After taking down the entire Guild, the duo decided to leave behind the Bounty Hunting life behind, and start to live their lives with each other. They kept on their travel's as a way to expand their horizion on the world around them, but decided to stop in one of the towns to have their official marrige with only their closest and personal friends that they made over the years. A few months after the wedding, Trent would soon discover that he would be blessed with his own child.

Travelling to the next town, Trent was caught in a fight between bandits and villagers that had just lost their homes to a powerful Dark Mage. After driving them away, the duo decided to go along on the trip in case of any other attacks, and it was after that decision that Trent reunited with sister, Keiko, and something he never expected, her baby girl named Momo Mai.

She explained what happened after their last encounterment, and what their current plan was after breaking away from the traveler's. The siblings decided to finally put the past behind them, and try to make a better future for their children. Their first destination was to head to the Ito Academy, where their mother was the current Head-Mistress of the academy.

After one week, they broke away from the villagers, and headed towards the academy with fear in their hearts, wondering what their mother will think of everything that changed over the years. Apon arriving, the gang finally met face-to-face with their mother after years of travelling. What was expected to be a series of scolding words, turned out to be an emotional reunion for the mother as Tsunade was just glad that her children were alive and healthy, along with her grandchildren. Trent was offered one of the teaching positions, but turned it down as he wanted to keep his status of bounty hunter, only this time it would be against evil people that did horrible things to others.

Arc of Mimicry - Is a Lost Magic taught to him by his Mother, Tsunade Mai, and gives him the ability to absorb any form of matter and energy into their systems, transforming their body into it, and allowing them to manipulate it into any shape or form they choose. Trent has a unique ability to this magic, where he can change where the material can cover up, and he often focuses the material inside his bones and often produces weapons right from his body, including three sharp claws that shoot out from his knuckles.

Magma-Make - Is a Caster Magic that allows the user to produce molten magma from their body and shape it into anything they can think of. Trent learned this magic on his journey as a bounty hunter. 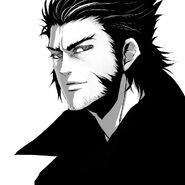 Younger Self
Add a photo to this gallery
Retrieved from "https://fairytailfanon.fandom.com/wiki/Trent_Jaiden?oldid=105777"
Community content is available under CC-BY-SA unless otherwise noted.