"Accepting your fears and embracing your weaknesses is the only way to truly understand and surpass yourself."

Ura was a Freelance Mercenary who went by the name "Akuma", which was given to him during his younger days by all the dark mages he defeated and imprisoned during his missions. He is a relentless brawler that never gives up no matter the situation, though he won't hesitate to sacrifice himself for his comrades if he deems it necessary. He traveled Earthland accepting almost any job or request that he came upon. Specially when it involves fighting a strong opponent, but he never lets his excitement get in the way of doing what is right. Having pride in his actions, not of a hero, but of committing to his own justice, which at times required to stain his hands with blood. Though as of now, he has trouble remembering who he was, his personality and traits have remained the same in the world of Hylion were he was transported after fending off The Rising Order, who were seconds away from ending his guild Ura's Mercenaries. Transported do to the help of Null, a god who has great interest in Ura. Ura now lives his days in this new world accompanied by new teammates fighting for what he has always believed in. "Justice". 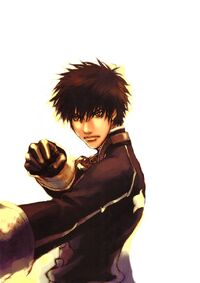 Ura is a young man that has a slim muscular build that has dark brown hair and piercing red eyes. Who commonly wears a black jacket with white endings that has one white line on top and bottom of each arm going from the neck down to the wrists. The jacket is button-less except for the two mid-sized straps located in the abdomen area that keep the jacket closed on the bottom half, but keep the chest area slightly open. On the back of the Jacket there is a large white cross that is split in the middle vertically. He wears a necklace with an unusual  shape. He wears two black gloves, black pants, a long brown belt that crosses at the waist and brown shoes. 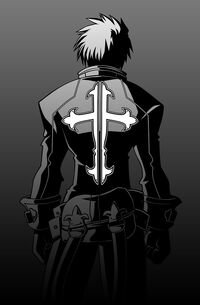 Ura is an honest person, that will always speak his mind no matter the situation or the person. He has always been this way, even when he was young. This caused quite a bit of problems though, as he would often get into fights with people creating a ruckus or taking advantage of innocent people. He had no tolerance for such things. Though thanks to his prodigious talent, he would mostly win his scuffles.

Ura grew up in Oshibana Town, which is a small town in the country of Fiore. As a young boy, Ura was gifted with an extraordinary amount of magic power. He started to take up Water Magic at the young age of five being taught by one of the local Wizards at the behest of his parents. Ura was able to pick up on the teachings rather quickly and even improving them to his liking, resulting in him being called a prodigy. His already impressive Magic Power only increased even further as he aged. Ura loved to fight, especially if he knew he didn't stand a chance. His uncanny ability to always get back up no matter how many times he was knocked down earned him the nickname "Akuma" Which translates to demon. His persistence was something to be admired and his abilities were even more impressive. At the age of ten, two traveling Wizards happen to witness a young Ura take on three adult wizards that were causing trouble. Ura with a smile on his face had somehow beaten the three wizards but the two watching could see his abilities although impressive were far from perfect. The two wizards noticed the incredible potential Ura contaied and after a few turn of events decided to teach the young wizard how to really hone his skills and improve his magic even adding Light Magic to his repertoire. Ura was taught many different fighting styles and increased his power further. By age seventeen Ura had become quite the powerful Wizard, having many countless victories under his belt against many strong wizards. Ura decided in following the footsteps of his two teachers who were actually part of a mercenary guild back in their day. They had originally planned to find a home in Magnolia, but decided to stay in Oshibana and teach the young Ura. After Ura learned all he could about being a Mercenary he decided to set off on his own and become a Freelance Mercenary, allowing him to travel to many different places and to meet all kinds of interesting people, but most importantly he was excited by the thought of meeting all kinds of strong wizards along the way. Ura decided to use an alias going by Akuma, as his reminder of how far he has come and where he came from. After seemingly traveling through all of Earthland Ura decided to settle down in a big way, by creating his own guild. At the moment he had only a three companions; Sei Isdeth, Nadia and Maya when he started his guild ,but after a incident involving a dark guild called Shattered Dusk Ura got a few new additions and is on his way to making his Guild, one that the people of Earthland could depend on.

Master Hand-to-Hand Combatant: Ura isn't much for showy martial arts, as he prefers to brawl against his opponents in a good fist fight. Though he lacks true martial arts training, he is a prodigious monster when it comes to fighting in close range. He reads his opponents rather easily and sometimes can accurately predict the movements of his enemies, though this is also do to his keen observation skills and the plethora of experience under his belt. Ura is never scared to get within a dangerous proximity of his enemies and trade blows, as it has become somewhat of a specialty to him. He is able to dodge attacks at the last possible second to mix in his own attacks, as well as control the energy within his body to absorb blows and dish out one more powerful than his foe.

Immense Strength and Endurance: Ura's strength and endurance comes from years and years of harsh training he endured from his two masters. From simple tasks as lifting and running to shattering rock with his bare fists and running full speed around his village until told to stop. His physical training garnered him the ability to create craters by simply punching the ground with his fist, though it could attributed to the large amounts of magic pouring through his body. As his Energy Magic, allows Ura to concentrate his magic to certain areas of his body either for increasing his strength or defense greatly. This is an ability he can achieve in instances as has become the same as breathing.

Enormous Magic Capacity: Since he was young, Ura was blessed with an outrages amount of Magical Power. Through the training he received from his two masters, he was able to refine and polish his power to the point it seems his magic is never ending allowing Ura to even use his strongest attacks continuously without getting tired. The results of his hard work could be further demonstrated by how easily and smooth Ura can exert his Magical Aura.

Extreme speed: Thanks to his training, physically he can run so fast it seems shadows trail behind him and thanks to his Light Magic, his speed borders on teleportation as he is able to disappear from sight and then appear behind his opponent instantly.

Is a Caster and Holder Type of magic. He can freely manipulate or create water around him and is even capable of creating it from almost anywhere as long as there is enough hydrogen and oxygen in the area. Most of his attacks make a blue magic circle appear as his attacks are activated.

Light Magic Is a Caster Type of magic that allows Ura to freely create, control and manipulate the light particles either created from his own body or from the surrounding area. Depending on the intensity of the light being emitted, he could cause his light to transform into that of a laser capable of burning through steel or burning his enemies greatly. He could also cause his light to have explosive properties when making contact. Though Ura, usually uses his light to add destructive power to his attacks by covering his fists with his light magic, he can also cover his whole body for an added boost in speed and defense or emit his light on certain limbs for different situations. Light Magic is versatile and has many uses that could range from increasing physical abilities greatly to blinding the opponents with a powerful light. Light Magic can also be used in creating illusions as well, though nothing of grand scale like actual Illusion Magic. Ura is also able to cover his body with his light for a monumental increase in speed which can be seen when a golden-like aura surrounds Ura completely. Taking this form also gives Ura the ability of flight, that he can used during battle or for traveling to various places at break-neck speeds. Ura can also take it further and transform his whole body to that of light, being able to move about at such speeds that most, won't be able to follow. This is also useful in dodging certain attacks as they tend to simply faze through while in this form. Light magic can take many forms such as rays of light or whole solid forms that can be used as shields or weapons.

Energy Magic is a magic which allows the user to control pure energy in all shapes and forms such as ropes, bullets and concussive blasts. It can be manipulated through an object if needed. Energy particles can also be gathered and used from nature such as trees,mountains,lakes,fire, etc. He cannot take energy from other wizards and their magic.Thanks to Ura's wealth of magic power this magic has become a force to be reckoned with. Ura's eyes will actually glow slightly red when using Energy Magic.

A Gift From Tragedy

Abilities: Extremely loyal to Ura and extremely fast. She is quite intelligent and has a sharp nose for tracking or smelling upcoming foes. Her Sharp claws and fangs give her a means to fight along side Ura.

Origin: Ura Found Nadia during one of his jobs where he was hired to stop poachers from hunting Wolfs for their fur. Although the job was a success a few casualties did occur as Nadia's parents died protecting her. Ura decided to heal the young cub and return her to her pack but Nadia decided to follow Ura instead now traveling where ever he goes.

Ura and Nadia are based of the game "Shadow Hearts"

Retrieved from "https://fairytailfanon.fandom.com/wiki/Ura_Fulgur?oldid=515444"
Community content is available under CC-BY-SA unless otherwise noted.