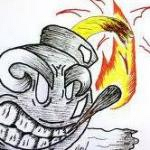 aka Bombkid, Bomb, Bomby or DaBomb

CAUTION: You are now treading on dangerous grounds. Landmines on premises, WATCH YOUR STEP. TO DA BOX >

My Real Life Self

I am an aspiring actor and comedian who is also a terrific singer, and I hope to become an internet critic or a voice actor. I plan to do reviews on video games, movies, and TV Shows. I love writing and enjoy a good fanfic every now and then. However, I have a slight case of Asperger's Syndrome which means I tend to talk to myself, I have little control of my emotions, and twitch a lot. I hate math and programming computer (and other stuff like that). I haven't been an anime fan for very long but the stuff I've seen is superb (I can only imagine what the bad stuff is like). Fairy Tail has become one of my all time favorite animes along side my gateway anime: Toriko. I also am a huge fan of professional wrestling and wish their were more wrestling animes out there. And uh, what else. Oh, I have a habit of leaving personal projects incomplete. School work is fine but not personal stuff; so if ya see a crap load of pages with the under construction template still on it, you'll know what that's all about.

Retrieved from "https://fairytailfanon.fandom.com/wiki/User:Bombkidbomb?oldid=266712"
Community content is available under CC-BY-SA unless otherwise noted.