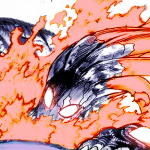 "Deleted scenes from the Revenant movie"
Want to talk? Post a message below under a section! Don't forget to sign your posts please, Thank you!

Hello there. I've read your Amplifier article and I'm curious if the effect of the magic can be channeled to the other person beside the user, also can a Celestial/Familiar Spirit utilizes this magic? Riku-ya (talk) 02:42, July 30, 2017 (UTC)

Yah, go ahead. Per

Nope, go ahead. Per

created a One Piece OC, Atlas D. Jason, a fiercely reputed pirate who ate the Blaze-Blaze Fruit. Check out the article on One Piece Fanon Wikia and let me know what you think.--Batman5295 (talk) 20:21, November 2, 2017 (UTC)Batman5295

BTW, if you haven't already known, but after the Fairy Tail manga ended, Mashima had already created a new series called Black Clover. Just wanted you to know if you want to read AND watch it. --SoulRise99 (talk) 4:34, November 12, 2017 (UTC)

have fun with that Damon, let me know when it's done so I can see

The only thing I wanted to use from the page was the description you had except these parts hence the reason why I wanted to ask permission first before I did anything:

As stated beforehand, Damon can shift any part of his body, including internal organs, into this solid shadow and then manipulate it akin to his own liking. By that, he is capable of stretching his own limbs while also enhancing their overall durability, then moving them in order to perform a variety of spells and unarmed attacks. It's even pointed out by Honorium that this is basic thing when employing this magic, therefore Damon can do things such as stretching, expanding and hardening, effortlessly. This shadow substance is often compared to rubber in a way, as Damon can stretch any part of his body either to attack or do his bidding. Another reason for this magic standing out is the fact that it can be offensive, defensive and even supplementary depending on the situation. For instance, by shifting different parts of himself into shadows, Damon can augment his physical prowess as he is much more durable, agile, all of those contributing for him to do far more better movements. His body can be compressed as if it was some kind of rubber, effectively enabling him to use some parts as if they were springs, in order to enhance the power behind his blows. Additionally, Damon could jump higher into mid-air by doing this process to both his legs. Aside from being more durable, Damon's body can also absorb little impact from physical blows as the shadows act like they're partially made of rubber. Even Damon's bones and organs can be affected by his magic.

Sometime after becoming a mercenary, Damon acquired and got implanted a Flaming Dragon Lacrima within himself, which would give him acess to the element of fire itself. Such flames can be generated and manipulated in a variety of ways due to Damon's intense training throughout the years, something which also provoked the lacrima to fully merge with his body.

Usual objects made out of common material can be burned up to ashes or a really decayed state upon contact with Damon's flames. The mage also being capable of temporarily shifting his own essence into that of flames. They are strong enough to withstand low temperatures, contact with quite some amount of water and also resist when being blown off by the wind, also being capable of consuming opposing fire magic of lesser quality by assimilating it into themselves. Damon can produce off those flames from any part of his body if he so wishes, preferring to augment his hand-to-hand combat instead. In fact, he is capable of controlling already existing fire and even expanding it, maybe as an explosion. Damon can also enhance his blows by erupting fire which will act like a rocket of sorts and further increase the damage done, by doing said eruption from his feet, Damon can temporarily fly.

The combination, depending on which path is taken, can be very deadly. By attacking using both of the elements in a fused fashion, Damon can pretty much hit someone twice with one hit as the shadows work for the blunt effect and the flames are marked upon impact, exploding afterwards. With such a thing, Damon can damage his opponent even if said person manages to block the hit, as the fire will explode afterwards. Even when being used separated, in a way, the elements can be deadly, for instance Damon could fool a very fast opponent by temporarily blinding them with the bright of his flames and then hit his target with a shadow-enhanced blow. It should be noted that due to the lacrima being forcefully implanted and being of different lacrima, Damon's brain was damaged in a little area.

Alright. As for the week and 50 edits to make a slayer magic, I just read that the rule only applies if your making a slayer character in that you can't do it within your first week and without 50 edits so did you maybe make a mistake or did the rules change?Skullguy123 (talk) 05:50, September 15, 2018 (UTC)

You're misunderstanding what I was asking. I asked if you made a mistake on what you said because you said that in order to make Slayer Magic' 'I need to be part of this fanon for a week along with 50 edits but when I read the rules, it says I only need those requirements if I want to make a Slayer and that I only need permission from an admin to make Slayer Magic instead of the week/50 edits you said I needed. Get what I'm saying?Skullguy123 (talk) 06:13, September 15, 2018 (UTC)

Can you add this picture to one of my pages?

The page in question I`m referring to is called Country of Avalon?

Retrieved from "https://fairytailfanon.fandom.com/wiki/User_talk:DamonDraco?oldid=619876"
Community content is available under CC-BY-SA unless otherwise noted.