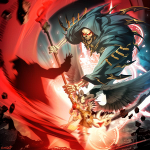 Thank you! And yeah I can make a title picture for you. Just give me a description of what you want: name, any particular font/color font, what kind of background picture? And I'll begin to work on it when I get home from work. -Lady Komainu (talk) 22:49, December 13, 2016 (UTC)

Sure, go ahead with all that. Also yeah, you can just change the name of your Demon Slayer Magic, don't worry - that's how I planned it anyway. Per

Sure, you can change your DS. Also I'll think about it, I've been going back and forth on that one. Per

If you wan't I can personaly put her bounty on the page or you can do it if you wan't.

It's cool bro, no rush. I live in the US pacific time just for a heads up. Good luck at work.

Thanks for informing me

Ehm, am i going first then even if i generally have only the evenings? ^^"

I generally suck at beginnings though and i don't even know how the arena looks.

Yo, Comic won't be online until later monday, just a heads up, so it sounds like the two of you got time.

So wanna start the Jigoku games round?

Sure, also you can't use magic and curses at once, sorry Per

So myself, or Liza, has left a review of your last match in a comment on the page. You move on to the next round, please see the second round updates at this blog: http://fairytailfanon.wikia.com/wiki/User_blog:Lady_Komainu/Jigoku_Games_2017_Bracket

Yo, I'm Serk. Nice to meet you. Apparently we're matched up against one another in the Jigoku Games second round, so we should get going fairly soon. I'll be occupied within a week or so, so if we start today or tomorrow we can at least get a post in every 24 hours which means we should both get at least 10 post in, which is enough to judge. Anyway, what do you want the name to be?

Hey I'm not sure if you read the full blog but like it says on there, you're going to need to tell me a bit more about him before I can accept him :)

~Liza(Queen of Swords and Stars)

Hear that. I usual do a 8-5 work day fulltime. But at least I don’t have to do nights. Btw in the future you want to have that fight between Shojiro and Irminsul? Yes I won’t request it till I have him complete which won’t happen for awhile.[[User:Twilight Despair 5|]] ([[The God of Creation]]) (talk) 17:24, September 22, 2018 (UTC)

I don’t do nights, as research shows working nights ages you faster. Plus I like to workout after work, keeps me athletic... takes work. Anyway, that’s fine. I still have the other Eight Warmages to make along side finishing Irminsul. I started on Wilhelm Wort.[[User:Twilight Despair 5|]] ([[The God of Creation]]) (talk) 19:18, September 22, 2018 (UTC)

I was wondering could I take ownership of Kiryk Lochlann? But it would only happen if I can’t decide on all the characters for my Nine Warmages. As Kiryk is already Spriggan Class and his Magic has massive city+ scale level destructive capabilities he fits the definition of a Warmage. The Warmages are more like Ajeel, Invel, or Brandish as most of the other Spriggans minus August and Irene were more specialized in specific magic rather than having massive scale magic. And the Warmages are made with the mind frame to be able to defend or decimate against any entire nation individually.

Example of my point are my two characters Wilhelm Wort and Phoebe Vastaril. Wilhelm’s War Magic can change an armies allegiance to his side. While Phoebe can use Sound Magic to hypothesize over a city to where whatever she says makes happen to someone’s body similar to Rose’s Bankai from Bleach.[[User:Twilight Despair 5|]] ([[The God of Creation]]) (talk) 18:32, December 22, 2018 (UTC)

May I inquire on the possibility of using your author-exclusive Creation Magic? It is essential to my character and I like how much thought that you`ve put into the magic.

Retrieved from "https://fairytailfanon.fandom.com/wiki/User_talk:KILLER5591?oldid=620553"
Community content is available under CC-BY-SA unless otherwise noted.