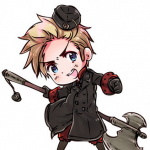 Hi, welcome to the Fairy Tail Fanon Wiki Thothology101! Thanks for your edit to the Mandi Starstrike page.

Getting started tends to be the hardest part for many new to any wiki, so here are some useful links to get you on your way here and clarify things for you.

I've gotten your request for Bear Magic . Due to it being the signature magic of Goldy Locksmith, I am hesistant on sharing. (Which is eating at me because noramlly I'm really open to sharing everything). So, I've come to a compromise.

If your character is...

Old: (Remember, Goldy is 19.), Goldy Locksmith learned Bear Magic from your older character. If this was the case, Goldy would have most likely been poor as a child and was taken in temporaily by your character.

Young: (Remember, Goldy is 19.​) Goldy Locksmith taught Bear Magic to your younger character. If this was the case, Goldy would have most likely taught the younger character the magic during her travels, possibly as a way to defend themselves.

I'm sorry if this is of inconvience with what you had planned, but Bear Magic is just one of those things that two different indiviudal mages who have never been in contact do not simply think of and create. (Does that make sense?)

Cool~. Here's the prompt: Goldy was pretty young to the traveling but knew how to defend herself. Niklas Thoth, being a kind person could have maybe took interest in Goldy's unorthdox magic, causing Goldy to like the kid. She could have taught him the bare basics and over time, he could have expanded on his knowledge. That sound good?Greenvivillon (talk) 19:09, September 6, 2015 (UTC)

Alright~. I edited the Bear Magic page. I simply changed the description so it's more open and added a section for Niklas to put his spells and such. You can edit the page whenever, no need to ask. (After all, I'll be able to check anyway)~. Good luck! :DGreenvivillon (talk) 23:24, September 6, 2015 (UTC)

We would love to have you join Koma Inu. We also chat in the app kik to talk about our stories and events going on with the guild so if you are interested please let me or User:Lady Komainu know.Zero "Crow" Isdeth (talk) 19:15, September 7, 2015 (UTC)

I would like to say welcome to the guild. Yaaaaay! I have added your characters to Koma Inu and again if you would like to be part of the kik chat you can contact User:Lady Komainu by entering Lady_Komainu in kik. Zero "Crow" Isdeth (talk) 01:25, September 8, 2015 (UTC)

Of course your character can join the guild! I will add them to the page asap! We have a group chat on kik that has all the guild members on it, so if you want me to add you on there just send me a message at Lady_Komainu. So glad that you wanted to join us!Lady Komainu (talk) 01:37, September 8, 2015 (UTC)

Well it wound't no longer be Bear Magic, now would it? You can do whatever you may please with your work. I don't mind if you cut & paste your bear magic stuff to Magic Objet Transfer Magic. Is that what you were asking?Greenvivillon (talk) 21:32, September 10, 2015 (UTC)

Take magic requests to Per, for that's technically her department and not mine.—Mina Țepeș

Hey, got your request for the use of Witchdoctor Magic . Sure! All I need to know is a few things:

1.) What biome/subbiome does he use for his Witchdoctor Magic. This is usually the place they feel most at home. (The atmosphere they grew up in, where they first learned magic, etc.)

2.) How your biome effects the basic Toxins Salkin uses and if he has any Signature Toxins.

3.) Any Non-Toxin Witchdoctor spells they may know. These are very uncommon and signature, but they can include purifying food and water or helping plants grow.

Edit: Alright, you've got all you've need to get started! On the character just be sure how the basic Toxins differ from the basic and the function of the Signature Toxin and you're good to go! I'll include Salkin in the confirmed users section and his signature spells soon. Mercutiorty (talk) 01:50, October 21, 2015 (UTC)

Any summoning/control of dragons is a bit overpowered, so no- hell, we banned Dragon Supremacy Magic. Just use wyverns. Per(This is my stage now!)(Still more~) 11:14, November 30, 2015 (UTC)

i know i sent you a message on kik, but do you want any/all of your characters to participate in the guild tournament? Lady Komainu (talk) 17:23, December 31, 2015 (UTC)

hey, so I was wondering if you were reading Dakota and I's fight. I plan to have Rayden get knocked out at the end, maybe Malina could run out and be concerned?  Liza(Bow Before The Queen!) 02:54, January 19, 2016 (UTC)

It would seem like we are to be partners in the Jigoku Games. When do you have time to discuss our battle plans?

Did you get my previous message?

wait didnt koma alredy sent it to you? Mad Chase Squishyblob 8:45am UTC

Hey there! Just wanted to let you know that we are having another S Class Trial for Koma Inu starting the first week of June. Obviously that is over a month away, but I wanted to see if you were interested in having your character participate? Leave a comment on the guild's announcement page if you would like to! Thanks! --Lady Komainu (talk) 20:49, April 29, 2016 (UTC)

Hi Thoth. I recently saw your question about if you could use my magic Arctic Atmosphere for your character Alex Winterfell. I've been inactive for a long time and I've only recently started coming back to the site. If you're still looking to use it, I don't mind if you do.

Or if you want to use it in any future characters you make, I don't mind as long as you check beforehand and ensure you don't try and pass it off as your own magic. Other than that, feel free.

It'd be nice if there was actual credit to me making the magic on her page, however I'm not seeing anything...and I've checked. Several times. Even if it's just a trvia/notes section at the bottom of her character page saying I gave you permission and that I made it.

If it's not added, I'm going to have to ask you to remove Liliana's magic from your character page. Failure to comply and I'll get Ash to remove it. I'm not angry, don't misunderstand me. However, when someone uses something of yours without permission, it's wrong. Just saying.

Nik! Of course I remember you and your Bear Magic man, you were one of the original guild members. You kinda disappeared for quite some time, but I never removed any of your characters. They are just on the second tab of the members table, since we had over 100 people and it was getting a bit long. Sad to hear that you are deleting them though, I thought the work you put into them was wonderful. But it is ultimately your decision. Glad I got to get to know you, and if you ever want to come back and join the discord chat, just know you have a home with us at Koma Inu. --Lady Komainu (talk) 01:10, November 6, 2017 (UTC)

Of course you're welcome to join back in the guild! Though a lot of people have become inactive, I am sure if you post on their talk pages with the interest of writing a story or anything, people will gladly come back to do so. And as far as chatting with everyone goes, we are now over on Discord instead of kik. The chat is pretty empty most of the times, but since the Grand Magic Games X806 is coming up soon, its picked up again in a new chat. So if you want to join the Koma Discord server, just follow this link: https://discord.gg/qb88ef. It will expire in a day, so let me know if I need to send another link. --Lady Komainu (talk) 03:35, November 8, 2017 (UTC)

Retrieved from "https://fairytailfanon.fandom.com/wiki/User_talk:Thothology101?oldid=556654"
Community content is available under CC-BY-SA unless otherwise noted.