Werecat (化け魔猫 (ウェレッカット), Werekkatto lit. Demon Cat with Magical Powers) is a supernatural species that lives throughout Earth Land, and are a sub-species of Werebeasts. As with Werewolves, they are well-known for the ability to shift between their human forms and beast forms, as well as forms in-between. With their ability to masquerade flawlessly as humans, Werecats more than often go unnoticed by the mundane population and even wizards, as the human bodies of Werecats are outwardly indistinguishable form a normal human.

Outwardly, a Werecat is indistinguishable from a normal human; in all respects, most particularly when in a "Human Body" (全人の形 , Zenjin no Katachi, lit. "Complete Human Form"), the werecat's external body is identical to a human's. Internally, however, they possess the inner workings of their cat origins; examples include possessing thirteen thoracic vertebrae — whereas humans possess twelve — seven lumbar vertebrae — with a human possessing five — and, like other mammals, three sacral vertebrae, humans' being the odd number out. In terms the skeletal structure in regards to limbs, are positioned nearly-identically to the skeletal structure seen in an anatomically modern human.

The mouth of a werecat, in any "body", functions the same as the mouth of an actual cat. In addition to possessing the specialized killing and tearing teeth that felines are known for, the tongue of a werecat possess the sharp spines that the feline species is known for. For werecats, however, this particular adaption is useless outside of ripping flesh from bone, as they do not posses fur with which to groom.

A werecat's sense of smell is also far superior to that of a humans — specifically fourteen times so — allowing them to detect a wider variety of scents from a longer range of land.

The eyes of a werecat function near-identically to that of a feline as well; they are capable of seeing at only one-sixth the light level that a human would require to see in the same clarity. Like domestic cats, werecats possess slitted pupils, which allow them to focus bright light through their eyes more efficiently than a human. At low light levels, the pupils expand to cover the surface of their eyes, taking in as much light as possible. However, like humans, the werecat has far superior colour vision to that of a cat, being able to distinguish the same ten million colours that a human can.

In a "Half-Human Body" (半人の形, Hanjin no Katachi, lit. "Half-Human Form"), the werecat develops more consistently feline traits. While retaining their human ears, their develop a set of cat ears perched directly atop their heads. These ears are covered in a fur that is typically — but not always — the same colour as the hair that rests on the top of the werecat's head. Like a cat's, these ears are highly sensitive, and controlled by thirty-two individual muscles which allow for directional hearing, so that a werecat's ears can move independently of the other ear.

In a Half-Human Body, the werecat retains human limbs, and their nails extend slightly, but they do not gain retractable claws. However, feline limbs, such as forelegs and hind legs, can be generated by replacing their current human limbs, allowing them to become more feral. In this state, they do in fact gain the retractable claws that most of the feline species are known for, and can utilize them as weapons.

Furthermore, a tail grows out from the coccyx at the base of the vertebral column, and much like an actual cat, possess a variable number of caudal vertebrae in the tail. The length of a werecat's tail varies depending on the invidual, as some can be particularly long and some might be short. Unlike a cat's tail, however, a wereat's tail is almost as strong as its actual limbs, and can be used as a "fifth" limb to procure objects and aid in combat.

In a "Beast Body" (野獣の形, Yajū no Katachi, lit. "Beast Form"), the werecat takes on a completely feral, bestial form, more akin to that of an animal than a human. They gain a massive increase in muscle mass, granting them a a strength increase in proportion to their new muscles, as well as superior reflexes, speed, and other physical bonuses that make the "Beast Body" an exceptional fighter and predator. It comes in two 'flavours' so to speak, a bipedal and quadrupedal mode; one built for battle, the other built for speed, respectively. In the former, the werecat can be mistaken much for a Werewolf, while in the latter form, they are, for all intents and purposes, a massive cat.

Due to the presence of strong magical energies from a werecat's soul within its body, they possess a unique form of immortality, referred to as "Resurrective Immortality", where, upon being killed, they can revive from the wound that managed to kill them. So long as the body of the werecat remains in existence, the creature will be "reborn" upon its death, in the same body, merely fully healed. This is done by drawing on ambient eternano in the atmosphere, which is drawn to the dead body of a werecat like a magnet attracts metal, assting in the regeneration process by serving as a catalyst for the magical energies within it's body. However, when dying of a natural death — or when the body is destroyed in a fashion that it no longer attracts eternano, such as a violent explosion — the soul leaves the body to find a new host, and with each rebirth, be it from natural death or a murder, the soul loses more and more of its energy, until the werecat dies like any other creature. A werecat, true to feline legend, possesses "nine" lives, with each cycle of regeneration using more and more of its energy. 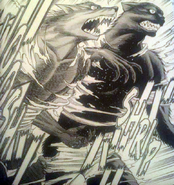 A werecat in Beast Body fighting alongside a werewolf.
Add a photo to this gallery

Retrieved from "https://fairytailfanon.fandom.com/wiki/Werecat?oldid=457258"
Community content is available under CC-BY-SA unless otherwise noted.