"You see these people around you? They are flies! Vectors if you will. Carriers of disease and death. What good are they to you?" 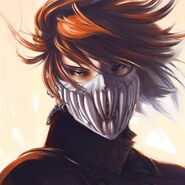 Light Magic: Yami is capable of using this magic at a very advanced level.  Yami is capable of not only blasting his opponents with light beams, but is also capable of creating solid constructs of light.  His mastery over this magic is so great that he can transform his body into light, although he remains physical. The high speeds he can move on are said to rival, and possibly be even faster than Hyperion Lucis.

Darkness Magic: Yami can also use this magic with just as good versatility as his Light Magic, but needs to switch between the two in order for it to work properly. This allows him to fight using blunt constructs of Darkness, and become intangible by turning into Darkness.

Grey Magic: A combination of Light and Darkness Magic, that perfectly fuses the two elements, creating a grey magic. This perfectly fuses the two abilities of Light and Darkness Magic, allowing for a high level of versatility, and freedom to do whatever he sees fit, without having to worry about switching between the two magics.

Retrieved from "https://fairytailfanon.fandom.com/wiki/Yami_Watatsumi?oldid=399773"
Community content is available under CC-BY-SA unless otherwise noted.