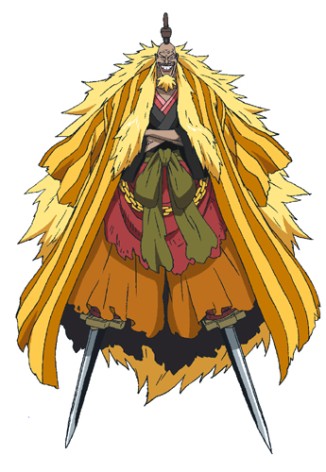 Yoru is the 12th dvision commander of Death Scycle.

Yoru is a massive mage dressed in traditional Japanese clothes consisting of an orange, a red and a black robe tied together with a dark green sash, with a golden chain around his waist; he also wears a yellow stripped tattered coat draped over his shoulders. He has golden mane-like hair, reaching down to the ground, and on the top of his head is a part of steering wheel that got lodged into his head after an unknown battle. The doctor has noted that trying to remove it could result in death, as it is lodged too deep. As for his facial features, he sports a golden bushy tuff of hair for a beard at the bottom of his chin, and a black goatee with pointed edges surrounding his mouth. His eyebrows are dark and pointed as well, and he has some purple spots on the left size of his face right around his right eye that indicates his age. He is usually seen smoking a cigar.

He also has two swords which are attached to his legs, and he is seen to easily walk and fight with them.

He is quite arrogant, and hates it when things do not go his way. Although he can remain calm at times. He is usually very bickery, and sleeps alot.

Air Blades: his magic is to create powerful air blades through the swords on his feet, he can use this in different ways and control their level of power.

Retrieved from "https://fairytailfanon.fandom.com/wiki/Yoru_Kaori?oldid=6164"
Community content is available under CC-BY-SA unless otherwise noted.