Start a Wiki
Zaraki Goken(ざらき ぐうけん Zaraki Guuken) is an Independent Mage who is widely known for his alcoholic ways, often drinking on the job, and carrying around a body-sized sake bottle wherever he goes. Kin was originally considered a ward of the government, due to his mother being arrested for child-endangerment, and was often sent from foster home to foster home, resulting in his running away when he was 13. After years of training, he became a very well-acomplished mage, and was even targeted by some Dark Guilds. His ways would soon change when he meet Akane Chiyoko for the first time, challenging her, and losing to her in a fight. However, the two soon began to develop feelings for each other, which resulted in his proposal for her hand in marrige. After the two eloped, they ran into the Guild Masters of Blazing Soul, who saw potential in the couple and invited them to join their Guild.

He is seen having light-coloured eyes with dark-coloured sclera, grey-toned skin as well as long, silver hair cover with prominent dark tips, arranged with his hair as combed back and spiked backwards. He is also seen wearing a flat-jacket with sweat pants that allows him for more moble movement. His hair color is considered to be a silvery ash color, due to his mother wanting to give him something that made him stand out of everyone else. He is seen most of the time holding a large sake bottle on his back, attached to him with rope, which gives him easy access to take a swig of the sake the large bottle contains.

Despite his outward apperance, Kin is actually a decent person from time to time, despite carrying an entire sake gourd on his back. From time to time he is often seen as an irritating person who causes trouble wherever he goes, and is especially well known for butting into conversations, romantic moments, and important meetings every chance he gets. Even though he has a rough exterior, deep down inside he is a kind and gentle person who always looks out for those close to him. He cares deeply for his guildmates, often making sure that any problems they might have, he can help them out with it. Kin shows deep romantic feelings for his wife, Akane, despite their first encounterment, and will lay down his own life in order to save hers. He rarely shows this side of himself, unless he is filled to the brim with sake or any kind of booze inside of him.

Familiar Spirit Magic(Holder) - Is a Caster Magic/Holder Magic that requires a binding contract with one of the spirits from the Familiar Spirit World. Zaraki's Familiar spirit is named Kiki, who is sealed inside of his giant sake gourd. Before her sealing into the Gourd, Kiki showed herself to be a very endowed spirit who had blue hair, razor sharp teeth, had a chinese shirt, and an mini-skirt with some form of rope around her hips. After she was sealed, all that changed was that she now wore a hat with a star in the middle of it and had a special talisman on her forehead to allow her use of her magic. Her main magics are two different forms of Sealing Magic and Absorption Magic that she uses in combination with her Gourd. Like her master, Kiki is often drunk from time to time, due to her home always being filled with sake, so when people see her, she is often tipsy and speaks with slurred words. Even though most Familiar's have a very bad attitude towards humans, however Kiki sees her master for how he really is and has grown to respect him and even love him like a brother.

Expert Swordsmanship - Even before his contract with Kiki, Zaraki has been shown to be very well-adapt with any form of sword imaginable. His known style is similar to the drunken fist of martial arts, always moving in an unexpected direction, using attacks opponents might not ever think of. His most common sword in use is Kiki's Familiar Blade, which he has long since mastered the odly shaped blade.

Immense Speed - Despite his usual drunken state of mind, Zaraki is very well-known for his incredible speed, and  reflexs when he is in a sober state of mind. He has been able to keep up with someone who uses High Speed without any trouble, and can keep up without having to use his own magic. 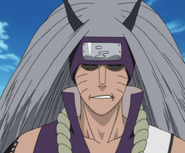 Meeting Akane for the first time 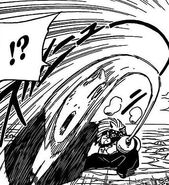 Absorbing Akane in their first meeting

Kiki's Familiar Sword
Add a photo to this gallery
Retrieved from "https://fairytailfanon.fandom.com/wiki/Zaraki_Goken?oldid=145597"
Community content is available under CC-BY-SA unless otherwise noted.