"Screw butt-wings! What good is she anyway? I mean, other than giving me a higher position in this rundown place we call a society. I can do fine on my own! I'll just keep doing what I always do.
Complain about life and do absolutely nothing?
Sell a bunch of crap I found in the alleyway! Do you know I once found a tooth? Sold that for like...five.
...You need a better hobby.
This isn't a hobby! This is a work of true proffesion. Like archaeology, only less bones, and a whole lot more crap."

Zeltris (ゼルトリス, Zerutorisu), also known as Zel (ゼル, Zeru) by her friends, is one of the Demons residing within Gehenna, and is among the New Generation of Demons born and grown within Gehenna. Zeltris is a self-employed merchant, but is more appropriately labelled as a con-artist for selling generally useless, overpriced garbage. She is also a childhood friend of Halvard Rider and Geten, having known their father Malvarak, and was bribed into keeping Geten and Halvard's existence a secret by Malvarak. Due to an incident in her childhood, Zeltris lost one of her wings, which resulted in her being addressed as One-Winged Devil (一有翼魔, Ichiyūyokuma). 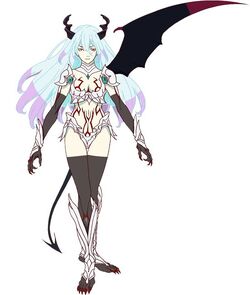 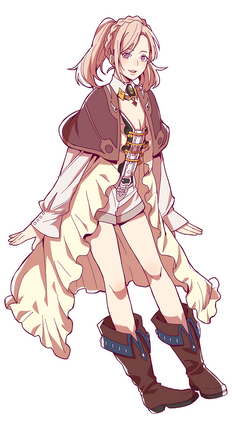 Retrieved from "https://fairytailfanon.fandom.com/wiki/Zeltris?oldid=350623"
Community content is available under CC-BY-SA unless otherwise noted.